The sensor can show the following:

Which channels the sensor actually shows might depend on the monitored device and the sensor setup. 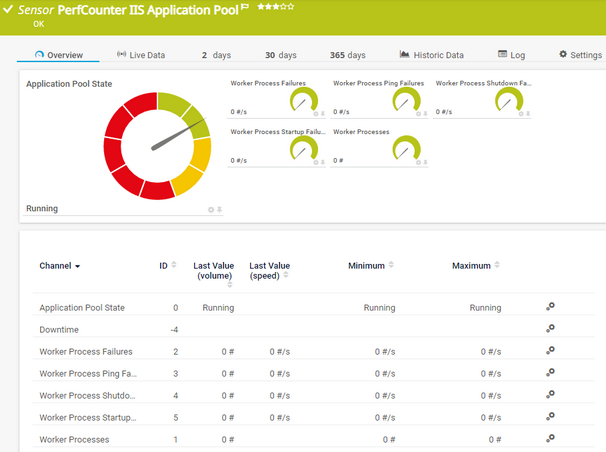 Sensor in Other Languages

You cannot add this sensor to the hosted probe of a PRTG hosted by Paessler instance. If you want to use this sensor, add it to a remote probe device.

To monitor IIS application pools, this sensor needs IIS version 7.5 or later to be installed on the target system.

Requires Windows credentials in the settings of the parent device. Preferably, use Windows domain credentials.

If you use local credentials, make sure that the same Windows user accounts (with the same username and password) exist on both the probe system and the target computer. Otherwise, a connection via performance counters is not possible.

The user account has to be a member of the Performance Monitor Users user group on the target system.

For this sensor to work with Windows performance counters, make sure that a Windows version 2008 R2 or later is installed on the probe system (on every cluster node, if on a cluster probe).

The Add Sensor dialog appears when you manually add a new sensor to a device. It only shows the setting fields that are required for creating the sensor. Therefore, you do not see all setting fields in this dialog. You can change (nearly) all settings in the sensor's Settings tab later.

The following settings in the Add Sensor dialog differ in comparison to the sensor's Settings tab.

Click the Settings tab of a sensor to change its settings.

Usually, a sensor connects to the IP Address or DNS Name of the parent device on which you created the sensor. See the device settings for details. For some sensors, you can explicitly define the monitoring target in the sensor settings. See below for details on available settings.

By default, all of the following settings are inherited from objects that are higher in the hierarchy and should be changed there if necessary. Often, best practice is to change them centrally in the Root group's settings. For more information, see section Inheritance of Settings. To change a setting for this object only, disable inheritance by clicking the button next to inherit from under the corresponding setting name. You then see the options described below.

For information about sensor settings, see the following sections:

Take Your
Monitoring
to the
Next Level